Johns Hopkins fields 24 varsity teams, 22 of which compete at the NCAA Division III level. The other two, men’s and women’s lacrosse, both compete in Division I. Seventeen of our programs are members of the Centennial Conference. 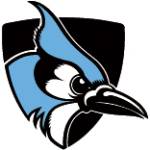 Hopkins men’s lacrosse is one of the most decorated athletics programs in all of college sports. We first fielded a men’s lacrosse team in 1883, seven years after the founding of the university. Since then, the Blue Jays have won 44 national titles, including nine since men’s lacrosse became an NCAA sport.

Our men’s lacrosse program was an inaugural member of the Big Ten Conference for lacrosse, which began its first season of play in 2015, joining archrival Maryland—the two teams have faced off 115 times since they first met in 1895—Michigan, Ohio State, Penn State, and Rutgers. The women’s lacrosse team joined the Big Ten prior to the 2017 season.