Home > About Us > History & Mission

The university takes its name from 19th-century Maryland philanthropist Johns Hopkins, an entrepreneur with Quaker roots who believed in improving public health and education in Baltimore and beyond.

Previously adopted accounts portray Johns Hopkins as an early abolitionist whose parents had freed the family’s enslaved people in the early 1800s. New research has uncovered census records that indicate enslaved people were among the individuals living and laboring in Johns Hopkins’ home in 1840 and 1850, with the latter document denoting Johns Hopkins as the slaveholder. Other new findings documented additional links between the Hopkins family and slavery, as well as indentured servitude.  Researchers are investigating these records in tandem with other archival documents to offer a more nuanced and complex understanding of the Hopkins family’s relationship with slavery. More information about the university’s investigation of this history is available at the Hopkins Retrospective website.

Mr. Hopkins, one of 11 children, made his fortune in the wholesale business and by investing in emerging industries, notably the Baltimore and Ohio Railroad, of which he became a director in 1847. In his will, he set aside $7 million to establish a hospital and affiliated training colleges, an orphanage, and a university. At the time, it was the largest philanthropic bequest in U.S. history.

Johns Hopkins University opened in 1876 with the inauguration of our first president, Daniel Coit Gilman. He guided the opening of the university and other institutions, including the university press, the hospital, and the schools of nursing and medicine. The original academic building on the Homewood campus, Gilman Hall, is named in his honor.

“Our simple aim is to make scholars, strong, bright, useful, and true,” Gilman said in his inaugural address.

In the speech, he defined the model of the American research university, now emulated around the globe. The mission he described then remains the university’s mission today:

To educate its students and cultivate their capacity for lifelong learning, to foster independent and original research, and to bring the benefits of discovery to the world.

Or, summed up in a simple but powerful restatement of Gilman’s own words: “Knowledge for the world.” 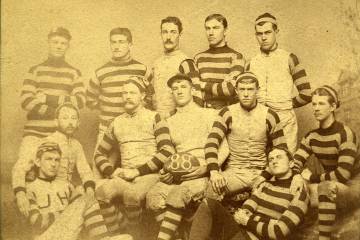